Following the updated ATP official calendar, the Astana Open ATP 250 series international tennis event will be held in the capital of Kazakhstan from 19 to 26 September 2021 at the Nur-Sultan National Tennis Center (NTC).

All the TOP players of the Kazakhstan's men's team led by the country's No. 1 Alexander Bublik and experienced Mikhail Kukushkin, Andrey Golubev and Alexander Nedovyesov, will play in the main round of the Astana Open 250 2021. While our young players will first have to pass through the so-called «crucible» of the Kazakhstan Championship. They are Dmitry Popko, Timofey Skatov, Denis Yevseyev, Beibit Zhukayev, Dostanbek Tashbulatov, Grigoriy Lomakin, who in tense confrontations will be able to profile themselves at such a major tournament as Astana Open 250 2021.

The ATP Tour is one of the few truly global sports properties, taking place across 64 tournaments in 30 countries, in addition to the four Grand Slams. As of 2020, the series includes 39 tournaments, with 250 ranking points awarded to each singles champion. Draws consist of 28, 32, or 48 for singles and 16 for doubles. 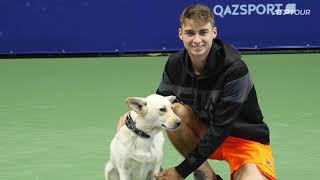 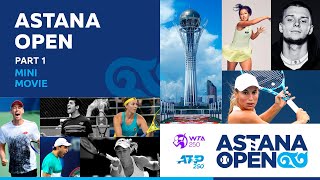 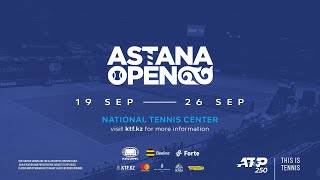 «Kazzinc» - is one of the leaders in non-ferrous metallurgy in Kazakhstan, a large integrated zinc producer with a large share of associated output of copper, precious metals and lead. The company was founded in 1997. Its enterprises are located in the East Kazakhstan, Akmola and Karaganda regions. Kazzinc actively participates in the social development of the cities of its presence, investing in significant projects. With the financial participation of Kazzinc, the «Smash» tennis center was built in Ust-Kamenogorsk with 7 outdoor and 4 indoor courts, 320 people currently training and the 200-seats stands capacity.

«ForteBank» is one of the most stable, liquid and well-capitalized banks in Kazakhstan with a strong focus on innovation and technology. An important component of the bank's activities is its support of social projects, including those aimed at the development of tennis in Kazakhstan. With the financial support of ForteBank, a tennis center was built in Petropavlovsk, which has become a modern training base for training professional athletes and tennis amateurs. In 2019, with the support of ForteBank, an exhibition match with world tennis stars Rafael Nadal vs. Novak Djokovic took place in the capital of Kazakhstan, and in 2021 Forte has become the General Sponsor of the ATP Challenger 100 and 125 series tournaments.

«Master Card» - We reshape the digital economy so everyone — individuals, financial institutions, governments and businesses — can realize their ambitions.

The «AquaRossa» company is engaged in the production of high quality drinking water in Kazakhstan. AQUAROSSA is the official water of all tennis tournaments and other events held by the Kazakhstan Tennis Federation.

For over 35 years, «Technogym» has been helping people to become healthier and happier. Physical activity, good nutrition and a positive attitude: the more people we have been able to help to make this a habit, the better is the quality of life on the planet. We call it Wellness: help us to spread it over the world.